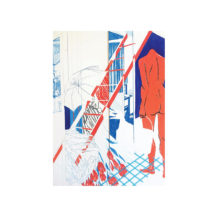 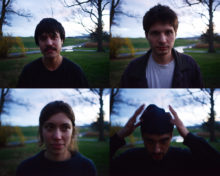 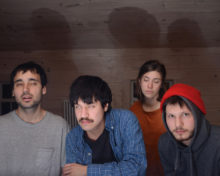 In describing Palm to the uninitiated, it’s sometimes necessary to clarify the meaning of the group’s name by raising one’s hand in the universal symbol of greeting and goodwill. The act of corroborating the aural with the gestural occurs everywhere in their work. On their latest EP, Shadow Expert, the syntax of popular music is regarded suspiciously and often subjected to revisions or reversals. Without formal training in their instruments, the players are left to determine their own musical language.
Eve Alpert and Kasra Kurt’s guitars occupy themselves most often with the pace-keeping work typical of a rhythm section. Meanwhile, Gerasimos Livitsanos’ bass and Hugo Stanley’s drums seem to perform commentary and reportage from deeply embedded positions at the front. Their contributions remain necessary to the composition, generating the kind of friction that other motion can be charted against: the grinding of teeth, the turning of an engine.
The record begins with the skittering appeals of one guitar to another, hard-panned left and right. They produce a groove, stop on a dime, and begin a series of nimble paces that might suggest the artful recovery from a skipped step. Here and elsewhere, the guitars confer and conspire with each other, finishing phrases and figuring it out. There is a faint delay to be heard in their communication, perhaps equivalent to that which exists between an object and its shadow, broken across several surfaces.
On the vocal track, Alpert and Kurt trade the barbs and bristles of a familiar argument and share the blissful cries of discovery. The “How could I forgive that? / How could I forget that?” refrain of “Two Toes” recalls the capricious turns of the gut in moments of grievance and doubt. These sonic and thematic dissonances are sustained, rather than resolved. This music draws the thought as it bounces around the head, draws the conversation as it circulates the room. Its most important questions are never answered but always rephrased.
On 2015’s Trading Basics, Palm’s experiments were more alchemical, more preoccupied with the impossible. Much of that music was submerged in some viscous and delicious substance, which often seemed to burn and bubble over. Two years and several tours of the United States later, the group sounds more limber, more acclimated to the press of events. At seventeen minutes in duration, these six songs are efficiencies of form, cutting quickly and decisively among scenes of bodies, systems, and intrigue.

Palm plays rock music backwards. Eve Alpert and Kasra Kurt’s guitars occupy themselves most often with the pace-keeping work typical of a rhythm section. Meanwhile, Gerasimos Livitsanos’ bass and Hugo Stanley’s drums perform commentary and reportage from their deeply embedded positions at the front. The band is firmly attached to the physicality of rock, but not as much its tone; their instruments tend to sound like any number of things at any given time.

None of the members of Palm are formally trained on their instruments. The band formed in 2011 at college in Upstate New York, when high school friends Eve and Kasra met Gerasimos and Hugo. In those early days, the band was just beginning to forge its collective musical identity through experiments in recording and performing live.

Their first album, Trading Basics (2015), was written in Hudson, NY, a riverside outpost where the group could clarify its intentions outside the direct influence of nearby cultural capitals. That year, the members of Palm relocated to Philadelphia, where they continue to live only a few blocks apart from one another. This proximity has facilitated a level of collaboration necessary for a sound so slippery to remain in the firm grasp of its players.

On 2017’s Shadow Expert EP, they made use of the steady hand granted by a tireless touring schedule, cutting their songs to efficiencies of pop confection without sacrificing the avant-adventurism at the center. The effort was met with praise from such outlets as Pitchfork, Stereogum, Spin, and Tiny Mix Tapes, who likened the sound variously to Stereolab, Slint, Sonic Youth and Broadcast. With Rock Island (2018), Palm excuses the company of these myriad influences with a sly brush of a hand, ushering the listener into a new domain, thrillingly strange for all its familiarity.