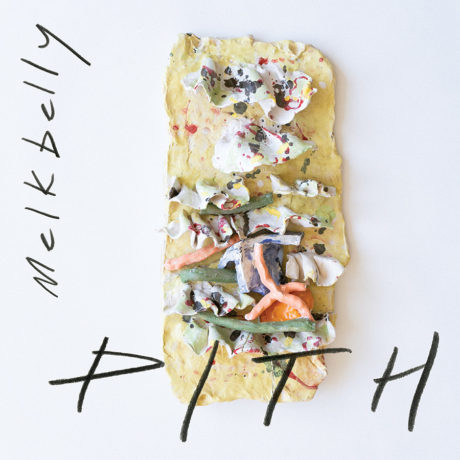 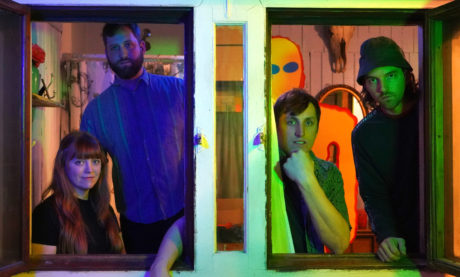 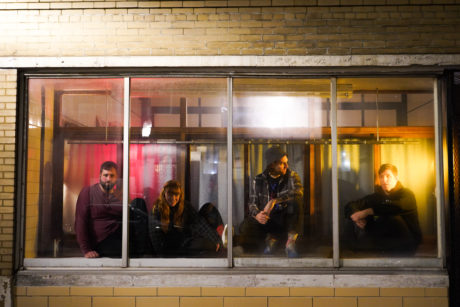 Melkbelly sculpts their signature balance between subtle melody and frantic noise on new album PITH, their second for Carpark Records/Wax Nine. The Chicago-based foursome has made spatial dynamics central to its arrangements, reaching for weirder highs and more startling atmospherics, negative space giving way to enveloping walls of chaos. This sense of form is reflected not only in the purposeful production, but in the ceramic cover art created by Chicago artist Deborah Handler.

After two years touring internationally, the band felt comfortable enough to rearrange songs they knew well, their renewed closeness guiding them. Their literally familial relationship was crucial for support, as PITH was summoned from a place of mourning. “We lost an incredible friend suddenly and nostalgia always acts as a helpful tool for me in navigating difficult times,” Miranda says. “Revisiting emotionally challenging moments or significant social interactions helps shed light on confusing feelings for me. Lyrically, grief gave way to considering life.” She drew from diverse scenes—Grimm-like children’s stories too dark for kids; thorny, mossy forests—to create stories that feel distinctly Melkbellian: philosophically strange, strikingly textural, funny and sad and open-hearted.

Maturation, as well as their DIY reverence, can be heard on the tempo-shifting “Sickeningly Teeth.” It’s an homage to “feel[ing] like shit really loudly or obnoxiously. You know, in an unapologetic youthful way,” deadpans Miranda. James describes it as a “rhythmic exploration to make the song feel like it’s pulling itself apart.” Follow-up single “LCR” similarly shapes PITH’s dynamics and mood. Its shifting signatures held steady by James’ frantic beat, the track is a purgatorial homage to motion, ultimately propelled by its tangled guitars and layered vocal harmonies. “It’s about how having conversations with the dead can scoot you along in life, even when you’re really only hearing one side of the conversation or making up the other half,” says Miranda.

Since their 2017 debut Nothing Valley, the members of Melkbelly have an even better understanding of their sonic motivations. “We’re always going to sort through the past to make better sense of the present,” Miranda says, and in doing so Melkbelly continually finds ways to mutate its sound. On PITH, Melkbelly sought space, and succeeded in crafting it. What a pleasure to be let in.

Since 2013, Melkbelly have cloaked forward-thinking pop-songs with a shroud of disjointed rhythms, feedback, and noise. It’s a pretty great trick. Peel back the layers of the group’s richand colorful sound and you’ll grip the simple and true melodies that lie within the discord. It’s as you move in closer that Melkbelly comes into focus: thoughtful artists who’ve dedicated themselves not only to their community, but to surprising hooks that explode in cathartic cacophony.

Born out of a Chicago DIY circuit that champions collaboration and experimentation across genres, the modest family affair began in earnest when the guitar team of Bart and MirandaWinters joined forces with drummer James Wetzel. The combo of a minimal-pop duo and a drummer who lashes at his kit like it’s being swarmed by wasps was steadied by the propulsive contributions of Bart’s brother Liam on bass. From a freak noise-rock project, Melkbelly morphed into a rising Chicago rock band, releasing a series of dazzling EPs before dropping an inventive and original debut full-length.

On that first album, 2017’s Nothing Valley, Miranda’s sometimes delicate, sometimes sneering vocals floated above the palpably synergistic shredding, with her and Bart’s dual guitar gnarling as complementary forces. Thrashing rhythms, idiosyncratic riffs, and eerie anthems: Melkbelly’s distinctive aesthetic held together practically in defiance of itself.

As the members of Melkbelly have grown together, they’ve played internationally-recognized fests like Pitchfork Music Festival, opened for the Foo Fighters at hometown stadium WrigleyField, and gigged alongside their most formative influences: Built to Spill, Lightning Bolt and theBreeders. Spending time with bands whose music shaped them expanded their musical vocabulary and sharpened their collective songwriting abilities. On brand new albumPITH, the group puts its expanded capacity to use, emphasizing the depth of its arrangements by giving tracks space. “Louder louds, softer softs—somehow this emphasizes the in-between,” explainsJames. As their stages have grown in stature, their recordings have developed in complexity.This dynamic evolution is a show of gratitude to the scene they call home and the heroes they now call friends, and also establishes Melkbelly as a forward-thinking group perfect at sounding just like themselves