Emily Reo Only You Can See It 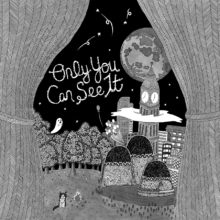 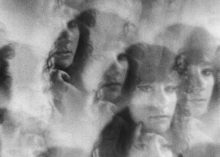 Emily Reo imagined a series of humans, alone in movie theatres, watching their lives unfold on the screens. “No one else could see what they saw, or interpret things in the same way,” she explains, reflecting largely on the concept of perception and her song “In Theaters,” the stunning, final track on her forthcoming full-length. “Picture where you’ve been / only you can see it,” she self-harmonizes, later concluding that “our lives play in empty theaters.”

Only You Can See It is a devastatingly beautiful collection of prismatic pop songs reckoning with the complexity of self-possession. Following the release of her acclaimed 2013 full-length Olive Juice, Reo spent five years writing, recording, arranging, producing and mixing these ten songs—at her apartment in Brooklyn, and at various studios and friends’ homes around New York. It’s her most intricate web of poetry yet, with prismacolor melodies winding through a vast pop vision. Reo employs her classical vocal training more than ever, her sweeping falsetto delivering doubletime verses brimming in metaphor and mesmerizing layered soundscapes alike.

For over a decade, Reo’s vocoder pop songs have played with the space between natural and metallic sounds—with every turn of her voice sounding sweeping, symphonic. Recording and touring independently since the release of 2009’s Minha Gatinha, she’s continuously released a slow drip of pop experiments via artist-operated imprints. On her 2016 single “Spell,” Reo grappled with all-consuming anxiety, numbness and isolation; here, throughout her latest album, with alternating grace and playfulness, she maps out a constellation of lived experiences that brought her back to feeling herself—facing loss, heartbreak, and death, but also fighting for her health and independence.

Reo’s songs have always been imaginative, and here she considers the space between imagination and truth with a heightened sense of tension that seems to have been bubbling under the surface for a lifetime. There are self-combusting soaring synth riffs, sparseness and then engulfing chaos. Melodies that unfurl into melodies (some of which came to her in dreams). On “Candy”, she continues her inquiry into the artificial versus the organic, a song about digitally-facilitated relationships; through robot sounds, she wonders about the confusion of feeling close to someone through a screen, sung from the perspective of someone falling in love with a machine.

“Balloon” is the record’s most patiently unfolding mini-epic, one bursting with the enormous energy of an expanding heart; an ode to intuition and growth. It’s a song that eventually floats upward as Reo’s vocals criss-cross like a hypnotic choir-of-one, meditating on navigating multiple relationships, and the necessity of self-reliance as a prerequisite for them.

“Ghosting” is her most personal song to date – as she sings about tracing her anxiety and sobriety, her words are clearer than usual, like a voice that has been yearning to escape. “It outlines my experience with mental illness – depression, anxiety, OCD – and how it made me unable to live even though I was alive,” Reo says. “It’s about feeling trapped inside your mind, not living your life, not knowing if you’re really living, if this is what your life amounts to.” So often, the experiences, anxieties and illnesses that define us aren’t visible to anyone else; only you can see it. Later, “Counterspell” is about overcoming the illness she laid out on “Spell”, using the latter track’s repurposed vocals to show “how anything can be reversed.”

In contrast, the buoyant side B opener “Strawberry” feels all the more powerful, a feminist banger about everyday condescension under the gaze of patriarchy, about navigating fragile male egos in music scenes and beyond: “Wish you had earned that PHD! In R-E-S-P-E-C-T! How many girls in this city are getting T-I-R-E-D?” she belts out. Against the backdrop of “Ghosting” and “Counterspell,” it feels like a victory—the thrill of hearing an artist coming into her own voice. Only You Can See It honors what can be the most challenging sight to see: to truly recognize yourself.

Emily Reo has been recording and touring independently for over a decade. Starting with 2009’s Minha Gatinha, a self-released collection of home-recorded droning noise-pop, she’s continuously released a slow drip of pop experiments via artist-operated imprints. Her second full-length, 2013’s critically acclaimed Olive Juice, was a progression towards bright, kaleidoscopic synthesizer layers and loops, with prismacolor melodies upon melodies; her songs depicting the beauty of nature through vocoder processing.

In 2016, she returned, transforming her vocoder-harmonies into something even more meticulous and mesmerizing with her “Spell” single. Reo had always gestured towards the tension between organic and robotic sounds in her work, but with “Spell” that duality underscored an inherent solemness and depth of emotion in her voice—a dynamic that comes to a head on her forthcoming 2019 full-length.

Over the past few years, Reo’s live shows have notably evolved from solo sets where she would play electronics alongside soft visual collages, to explosive three-piece endeavors full of expressive drumming and keytar soloing—a shift that speaks to the evolution of the project since Olive Juice. With each new body of work, Reo has increasingly pulled back the haze, sharpening her pop vision; Only You Can See It is her most fully-realized collection to date, with her most intricate lyricism and dynamic songwriting. Reo’s background as a visual artist continues to play out over her sprawling pop songs: her ear for negative space, for shading and saturating, for shifting between the bright and the subdued.

Recorded at various studios, apartments and homes around New York—notably, it was partially recorded with Julian Fader and Carlos Hernandez at Gravesend Recordings—Only You Can See It is Reo’s Carpark debut, following releases with Orchid Tapes and Elestial Sound. Over the years, Reo’s self-booked tours have brought her to community spaces and all-ages venues around the U.S. and internationally. Reo has been inspired by the many places she’s called home: Orlando, Boston, Los Angeles, Montreal. She currently lives in Brooklyn.