VIDEOS
Tiger Tank
No Below 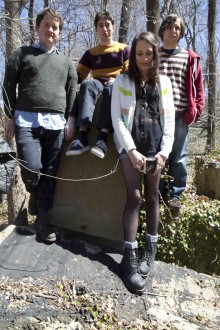 On their debut full-length, Western Massachusetts’ Speedy Ortiz manages a bit of magic by conjuring the spirits of classic American indie rock, while twisting those ghosts into new shapes. It’s easy to hear the influences of Helium, Jawbox, and Chavez on this album, as well as nods to their contemporaries including Grass is Green, Pile, and Roomrunner. Sweet vocal harmonies run up against gnarly distortion, aided by basic, chunky bass parts and heavy, fill-laden drums.

The album was recorded in a few days in November at Justin Pizzoferrato’s (Dinosaur Jr., Chelsea Light Moving) studio, Sonelab, a huge space in an old factory in Easthampton, Mass. The sessions went from very early in the day until very late at night, with the band taking its time to experiment. Pizzoferrato’s collection of old distortion pedals were utilized on both the record’s guitars and vocals.

The theme of the occult and the supernatural runs deep through Major Arcana, inspired by singer-guitarist Sadie Dupuis’ reading on black magic. Dupuis’ sometimes knotty and abstract lyrics bring to mind fellow wordsmith Stephen Malkmus, while referencing horror film tropes, chemistry, and neuroscience. Major Arcana’s literal translation is “major mysteries,” a phrase from tarot cards. “I don’t write in a narrative way and am more concerned with use of language than meaning,” Dupuis says, “so I like the open-endedness of the title and the way it invites interpretation.”

Speedy Ortiz has established itself as one of this decade’s most vibrant bands since their 2012 debut EP Sports. That EP introduced listeners to the band’s constant study of contrasts, with vocalist and guitarist Sadie Dupuis’ gnarled riffs acting as both counterpoint to and bolsterer of her acerbic, conversational poetry. 2013’s Major Arcana went further, the members’ reflexive chemistry inspiring them to push the limits of their sound; propelled by the rhythm section of Darl Ferm (bass) and Michael Falcone (drums), their first full-length chugged along with a swaggering gusto that could command a sweaty Boston basement as easily as a festival stage, leading to touring with legends of the “alternative” boom like The Breeders, Mary Timony (Ex Hex, Helium) and Stephen Malkmus & The Jicks. 2015’s Foil Deer added headphone-ready detailing to the already clamorous mix, with worldwide headlining dates on which they were supported by modern-day best-new-music makers like Mitski, Alex G, and Downtown Boys. Their no-nonsense approach to progress, as evidenced by initiatives like their first of its kind in-concert “help hotline,” and Dupuis’ tackling of issues like bystander intervention and inclusivity in the music industry—in her lyrics, and as a frequent panelist and speaker—makes the band poised to surge into the future.

Twerp Verse, Speedy’s third album and first with Philadelphian Andy Molholt (Laser Background) on second guitar, is urgent and taut, adding surprising textures like Linn drums and whirled guitar processing to their off-kilter hooks. Dupuis, whose electropop solo project Sad13 debuted in 2016 shortly after her own move to Philadelphia, has become more instinctive in her songwriting—her home-recorded demos mirror Twerp Verse‘s songs in a closer way than any other Speedy record—while her lyrics have become more pointedly witty. The band’s camaraderie and crate-digging is evident, with diffuse reference points like Squeeze, Hop Along, Prince, Paramore, and Brenda Lee being sucked into the band’s chaos. Even when Dupuis sings of alienation and political weariness, the pop maelstrom swirling around her provides a defiantly charged, mussed-but-hooky optimism.