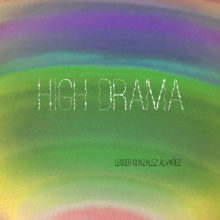 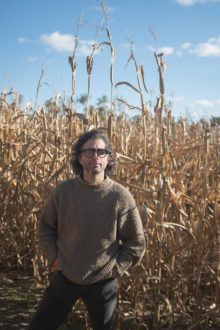 Made as a meditation, Havana-born musician, poet, and visual artist Lesser Gonzalez Alvarez’s High Drama conjures Michael Mann car chases through city streets lined with palm trees drenched in neon. Drawing inspiration from intimate studio affairs like the self-produced soul-jazz of Shuggie Otis and John Carpenter’s film scores, this is a layered instrumental synth odyssey into recently bygone eras—even as its eight tracks are undeniably suffused with the daily dissonance of our times.

As with all of his artistic practices, Alvarez crafted this record with a minimal, self-sufficient approach using the tools at hand. In this case, that meant deploying a late ‘80s synthesizer bought for $100 on Craigslist as a tool of meditation and reflection during tense times. Music has suffused every phase of Lesser’s life: his childhood took him from Havana to Florida, where he was exposed to Miami Bass and electro and the south Florida experimental electronic scene; while attending art school in Baltimore, he put down roots in a thriving music scene that included musicians like Beach House, Dan Deacon, and Future Islands. He now resides in Austin, where he works as an artist, illustrator, and designer, is preparing his second book of poetry, and pursues a new fascination with  paleontological field work and research.

From the slinky fluorescent-jazz “Work It Out” to the foreboding pulse of “Spades,” High Drama conjures all of these places and experiences. This is headphone music that pairs well with wood-paneled basements and entertainment centers piled high with stacks of Nintendo cartridges and VHS tapes, an aural elixir with tasting notes of warbled dance-music broadcasts transmitted from a Miami radio tower during hurricane season.

High Drama will take you back to the sound of your favorite tape getting worn out, an idiosyncratic synth symphony that surfs above our apocalyptic times, despite the tidal waves and apocalyptic storm clouds looming on the horizon. Suggested listening exercises: close your eyes and imagine High Drama as an Earth, Wind & Fire album cover come to life as a Saturday morning cartoon; use it as a tool to visualize what Blade Runner might have been if Eddie Murphy had landed the role of Decker.

Lesser Gonzalez Alvarez was born in Havana, Cuba in 1983. He is an interdisciplinary artist, a professional illustrator / designer, & a writer of poetry and music. He holds his BFA and Master of Arts in Digital Arts degrees from the Maryland Institute College of Art.