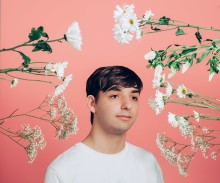 For his Carpark debut, Skylar Spence takes a step away from the more genre-shuffling styles of his Internet releases to focus his skills on high-power pop. The title track of the “Fiona Coyne” 7-inch is an uplifting tribute to fantastical romance and the joyous dreams pop culture can provide. Mastermind Ryan DeRobertis lays down a funky guitar riff and bass line of Chic-quality to tease our senses before tickling us silly with the chorus’ ecstatic horns. “My love’s on the silver screen/ she’s always playing make believe,” sings the 21-year-old songwriter, playing a bit of make-believe himself. The song, named after a certain graduate of Degrassi Community School, acts out the fantasy of dating a TV star and plays with the idea that music can be something of a catalyst for romance.

The b-side, “Fall Harder,” is a lovelorn hit about a somewhat unattainable beauty. “You’ve got me under your spell/ and baby, I couldn’t fall harder,” DeRobertis sings over an Orange Juice-worthy riff and electronic subtleties like the sound of a Galaga battle. For this 7-inch, DeRobertis wrote danceable love songs with a nostalgic aesthetic to the production “because I think nostalgia is inherently narcissistic and I’m currently very into the idea of exploring the connection between nostalgia and narcissism,” he says.

Skylar Spence is the continuation of Ryan DeRobertis’ Saint Pepsi project, which he started in late 2012. In the years since, he’s released a number of sample-y long-players full of slo-mo funk and boogie, and he rose to prominence as one of the more distinct voices associated with vaporwave corners of the Internet.

Growing up listening to the likes of Duran Duran and Chic, 22-year-old DeRobertis had plenty of inspiration when he started Saint Pepsi as an Ableton exercise. And though he began writing music at age 13, he hadn’t tried writing his own song in the style of his favorite music until “Fall Harder,” which appears on Skylar Spence’s full-length debut, Prom King. After strengthening his skills as a producer with the Hit Vibes album, he began incorporating his own instruments and production flourishes into his work, first with the Gin City EP. Prom King distills DeRobertis’ sampling style into an idiosyncratic melody machine, introduced his own vocals to the mix, and adopted tighter disco and new wave song structures. It’s “pop music for freaks,” as DeRobertis has it—outlandish aesthetics filtered through his deft intuition.