Dent May Face Down In The Gutter Of Your Love

1. Face Down In The Gutter Of Your Love 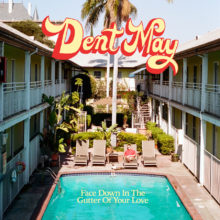 Mississippi native Dent May writes, performs, and produces homemade pop music from his home in Los Angeles. A stylistic chameleon, Dent’s recordings echo folk, disco, R&B, psychedelia, country-western, soul, and funk sounds of the past, present, and future. He has released three albums on Animal Collective’s Paw Tracks imprint with a fourth on the way via Carpark Records.