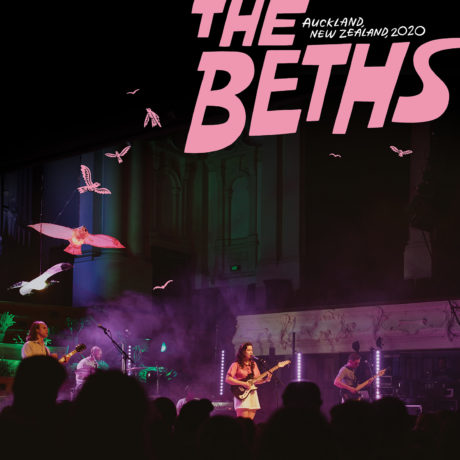 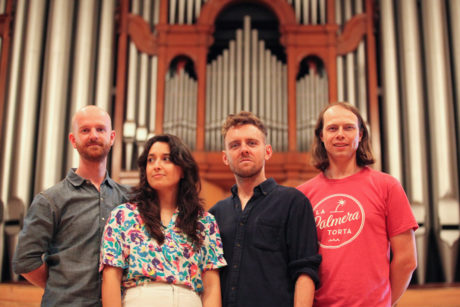 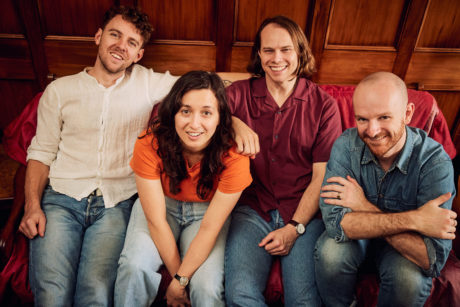 Carpark Records · The Beths - "Future Me Hates Me - Live"

The anticipation is there in Elizabeth Stokes’ solo guitar riff under the opening lines of “I’m Not Getting Excited”: a frenetic, driving force daring a packed Auckland Town Hall to do exactly the opposite of what the track title suggests.

As the opener of The Beths’ Auckland, New Zealand, 2020 expands to include the full band, the crowd screeches and bellows. It’s a collective exhalation, in one of the few countries where live music is still possible.

The album title, and film of the same name, deliberately include the date and location, lead guitarist Jonathan Pearce says. “That’s the sensational part of what we actually did.” In a mid-pandemic world, playing to a heaving, enraptured home crowd feels miraculous.

In March 2020, everything seemed on track for another huge year for The Beths. Home after an 18-month northern hemisphere tour, they had just finished recording sophomore album Jump Rope Gazers and were primed for more extensive touring. But within days, New Zealand’s lockdown split the band between three separate houses. All touring was cancelled.

“It was existentially bad,” Stokes says. As well as worrying about economic survival, they lost something crucial to the band’s identity: live performance. “It’s a huge part of how we see ourselves… What does it mean, if we can’t play live?”

The band found an outlet through live-streaming, returning to the do-it-yourself mentality of their early days to connect with a global audience. The album and film have their genesis in that urge to share the now-rare experience of a live show, as widely as possible.

The fuzzy-round-the-edges live-streams pointed the way aesthetically. Native birds, wonkily crafted by the band from tissue paper and wire, festoon the venue’s cavernous ceiling while house plants soften and disguise the imposing pipes of an organ. The presence of the film crew isn’t disguised: much of the camerawork is handheld; full of fast zooms and pans.

With much of the material still fresh, the band was less focused on re-invention than playing “a good, fast rock show”, Pearce says. The tempo is up on crowd favourites “Whatever” and “Future Me Hates Me” (released as a live single on its third anniversary) as both band and audience feed off the mutual energy in the room.

Certain songs have taken on special resonance post-Covid. Pearce has found “Out Of Sight”, a tender rumination on long-distance relationships, hits particularly hard with live audiences.

Album closer “River Run” visibly brings Stokes to tears as a mix of achievement and relief kicks in. “You can finally relax at that point … You play the last note, breathe out a sigh and look up – and you’re in a giant room full of people happy and smiling.”

“Looking back on the strangest year in living memory for the world I am so grateful to have been able to experience live music here in NZ, a rare privilege. Somehow, through that time the musicians and audiences of Aotearoa /NZ felt closer and more supportive of each other, turned out in greater numbers and celebrated a diversity of talent. The Beths have recorded and filmed one of the pivotal events of the year, their concert at the Auckland Town Hall. Its high energy pop music for the ages.” – Neil Finn (Fleetwood Mac, Crowded House, Split Enz)

The Beths is a band from Auckland, New Zealand composed of vocalist/guitarist Elizabeth Stokes, guitarist Jonathan Pearce, bassist Benjamin Sinclair, and drummer Tristan Deck. Stokes, Pearce, and Sinclair started playing music together when they were in high school, while Deck met them through the local music scene and joined the band in 2019.

The four-piece’s breakout debut Future Me Hates Me was released via Carpark Records in 2018 to international acclaim, hailed by Pitchfork as “one of the most impressive indie-rock debuts of the year.” The next year, The Beths were nominated for five Vodafone New Zealand Music Awards, winning Best Group and Best Alternative Artist. A slew of international touring ensued, with shows supporting Pixies, Death Cab for Cutie and The Breeders; appearances at major international festivals including Primavera Sound, The Great Escape, End of the Road, SXSW, Pickathon and more; and headline tours across North America, the United Kingdom, Europe and Australia. That catapult from working day jobs and playing music in New Zealand into the international spotlight was the catalyst for their second record, Jump Rope Gazers, which chronicles the bizarre leap when touring becomes your full-time job and the unexpected homesickness that comes with success. The record was released in July 2020 to widespread praise, with Rolling Stone calling Jump Rope Gazers “Beatles-level melodic smarts”, The Line of Best Fit naming it an “overwhelmingly thrilling record” and Phoebe Bridgers even told Charli XCX in an interview that “[‘Jump Rope Gazers’] fills me with unbridled joy.“ The album saw The Beths win Album of the Year, Best Group and Best Alternative Artist at New Zealand’s Aotearoa Music Awards later that year.

The Beths spent the rest of 2020 and most of 2021 at home, hosting several live streams for fans and working on new material during the height of the pandemic. They also released Auckland, New Zealand, 2020, the band’s live album and full-length concert film. It was recorded at Auckland Town Hall in November 2020, at a time when New Zealand was one of the few countries where live music was still possible: a small miracle captured on tape and film. In early 2022, The Beths released a standalone single, “A Real Thing,” their first studio release since Jump Rope Gazers.

The Beths’ third and best album, Expert In A Dying Field, will be released on September 16, 2022 via Carpark Records. Its 12 songs explore the same noisy, cerebral indie-rock-meets-power pop of earlier records, but imbued with an electric shock of new confidence: a record meant to be experienced live.